The media are once again obsessing about the economy, or more accurately the lack thereof, to a back-drop of procrastinating politicians who are no more qualified to administer public finances than chimps are to perform brain surgery.

Everyone seems to accept that a country’s economy shall be measured by the ratio of its public debt to its GDP. I question this, on the grounds that whilst America’s 8.5 trillion dollars is a lot of debt, it represents about 27’000 per inhabitant, which doesn’t really sound that bad. The Icelandic 15 billion dollar debt pales in comparison, but per inhabitant it’s 47’000, which is nearly double that if the USA.

Here’s the Public Debt versus GDP for a cherry-picked set of countries, essentially the developed and significant nations: 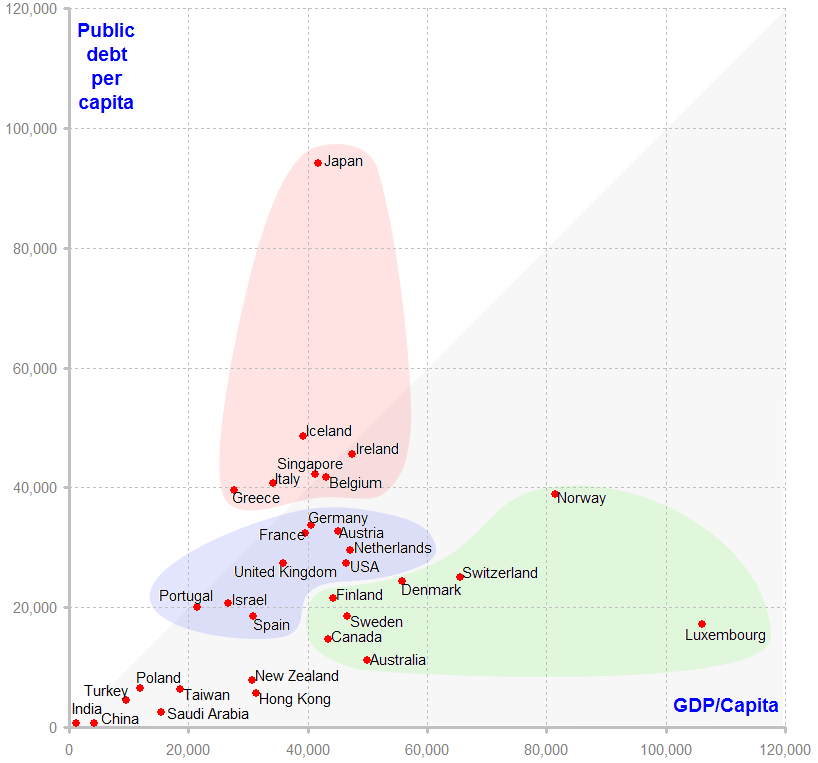 The numbers are in USD, source CIA Factbook, IMF and World Bank, in this spreadsheet PublicFinances.xls. The horizontal scale shows productivity, the vertical scale measures indebtedness. The grey triangle encompasses those countries whose public debt is less than a year’s GDP.

There are three coloured clusters, which group those who have similar economic habits.

The others make for a few interesting observations.

China and India, regularly upheld as models of economic development, are still in abject poverty at the individual’s level. When average inhabitant generates 4$/day (India) or even 19$/day (China), even a homoeopathic increase in employment will give you 10% growth a year; certainly not a notable achievement. To put that into perspective, if China’s GDP increases by 10% (compounded) every year, it’ll reach Germany’s current productivity in 2035. I’m not holding my breath.

Despite their immense income from oil, the average Saudi’s income is barely a third that of an Irishman (but the Irishman has twenty times the debt).

Finally, for all the current fretting over the American debt, it’s comparatively modest in relation to the population. The Greek and Irish economies are getting lots of publicity, but there are others whose public finances are much worse. Italy, Belgium, Iceland and above all Japan are going to have a much rougher time putting their houses in order.

One Response to “Debt and GDP – Accounting for population”