The Democrats and Republicans are slogging it out, trying to find a way to reduce the US debt. A laudable effort, but frankly, it’s pissing in the ocean. To see the big picture, we’ll take a look how the US government has been running its shop over the last century or so. Take the first half of that period, up until 1970, when the gold standard was abandoned. Notice that all numbers are in millions of dollars: 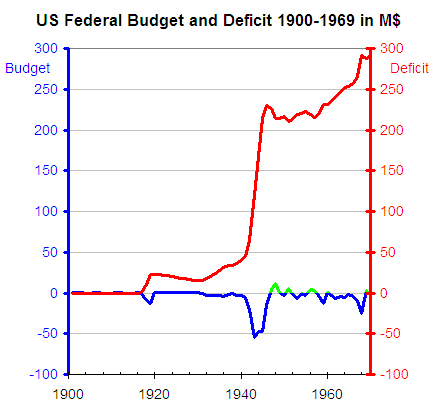 The second World War made a nasty dent in the finances, but that’s perfectly understandable. I’ve shaded the years where the books showed a ‘profit’ in green; there are precious few and the amounts are insignificant.

Since 1970, the picture changes drastically, we have to multiply the scale by a factor of 50’000; we’ve moved from millions to billions: 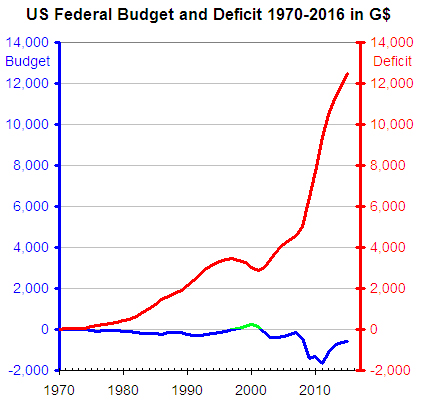 You might notice, correctly, that the debt in 2011 is shown around 9.6 trillion, when it is in fact 14.3 trillion. Presumably there’s another 5 trillion that was borrowed somewhere; a trifle that we’ll ignore.

The message to take away here is that the US government has balanced its books in 4 years out of the last 40. Perhaps more telling is that those 4 rare years are thanks solely to the dotcom bubble and the true value is directly correlated to the main thing it generated: hype.

The average American thus owes some 47’000$ on behalf of his government (and an average of 7’000$ on his credit card, but that’s another story).

Let’s zoom in on how the White House sees that debt evolving: 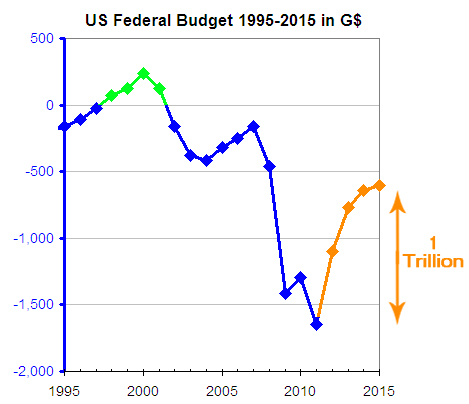 The dotcom money is put into perspective and we get to the part where I’m asking myself who’s been smoking something dubious. Remember, these are the numbers I obtained from the White House, which predicts that the debt will be reduced by 1’000’000’000’000$ in the next 4 years.

Thus, every American man, woman and child is going to reduce spending by 833$ every year, not to eliminate the debt, but simply to halve the yearly budget deficit.

The Americans are definitely in the shit; but the shit they’re in isn’t the shit that they’ve been smoking.